Central to the Good News of Jesus the Christ is forgiveness.  But, what does that mean?  Let’s start with unforgivness.  To be unforgiven (in its fullest sense) is to be cut off, excluded, removed, named unworthy, seen as broken, and deemed unloved. Conversely, then, to be forgiven is to be integrated, included, embraced, named as precious, seen as beautiful, and deemed beloved.  In my mind, this then makes at least part of Good News of Christ the radical and crazy Divine proclamation that YOU, just AS you are, are an immensely valuable, totally included, and beloved child of God.  In short, as a free and good gift from the infinitely good God you are seen and named as perfect and whole … period … no doing required.  It’s ALL grace.

Now, I’ve been Christian my whole life and this definitely isn’t the story I’ve usually heard.  I think what I understood when it comes to God, the Gospel, and forgiveness is pretty typical for American Christianity and goes something like this: God made us to be in relationship with our Creator, one another, and the world.  To help us do this well, our heavenly Parent gave us some commandments (there are 613 in the Old Testament) to obey … with the expectation that we would … 100% of the time.  Being human, though we naturally did NOT do this, which meant we needed to be forgiven in order to be right with God.  Before Jesus, this reconciliation was accomplished via blood sacrifice of animals. Christ’s death on the cross, however, was a once and for all sacrifice that would permanently restore us to right relationship with our Creator … IF we believe in Jesus the Christ.

Let me start by saying this is just a blog and all I’m doing is sharing a thought experiment of sorts with you because it’s bringing me greater life, connection, awe, and love with God, others, and myself.  Now, while you can certainly find support for what I lay out in the second paragraph in the Bible, you can also find voices that speak against and contrary to it. It occurs to me it is a very LEGALISTIC way of viewing forgiveness, and it makes sense that we latch on to this in America because we’re a highly litigious society (that’s a fancy word meaning we sue each other and take each other to court A LOT).  I think the problem with a legalistic understanding of forgiveness is God’s essence and nature is relational.  God is love and we’re made in that image.  I think what happened, though, is that love and relationships are messy, require vulnerability, leave us open to hurt, and are in a sense illogical.  So, craving certainty and structure we’ve latched on to a more rigid and structured way of understanding things, i.e. a legalistic take on forgiveness.

By the way, as a quick, but relevant side note, just because something is in the Bible doesn’t mean it’s directly from God or is always applicable.  Part of the inspiration of Scripture is its humanity.  I think the messiness, conversations, contradictions, contextual nature, and debates in the Bible are a beautiful illustration of the profoundly relational nature of God.

I honestly think the biggest thing we need forgiveness from is thinking that we had to do X, achieve Y, or be Z in order for life to be good, to be in God’s favor, to be worthy of God’s love, to be connected to our heavenly Parent.  The lie is that we ever had do ANYTHING to get our Creator love us, or that anything we did or didn’t do would make the Divine love us less.  Worth, belonging, and love are purely and simply grace, they are AMAZING gifts from God that each and every one of us is imbued with NO DOING REQUIRED.  To spread forgiveness, to give forgiveness, then, is to live, share, and spread this Truth.

With all that in mind let me share a few stories to hopefully help spread this Gospel goodness.  Nearly ten years ago I was engaged, and my then fiancée, Carla, was visiting me in Las Vegas with her son.  Carla, Darian, my daughter (Lara), and I went for a fun family hike at Red Rock Canyon.  In a freak, surreal accident I slipped, slid, and fell 30 feet off a plateau head first onto a boulder.  With a broken head and body I should have died, but I didn’t, as I believe Love rescued me.

I spent the next 6 months in hospitals (2 months in the ICU and 4 in inpatient rehab), during which, because of my severe Traumatic Brain Injury, severe damage to my vision (I have no depth perception or peripheral vision), and other traumas, I had to relearn to walk, eat, emote facially, move about rooms, navigate in public, and much more. I share this because even after I left the hospital I felt broken physically because my vision prevents me from driving and hampers a lot of things I previously took for granted (like navigating uneven terrain at the beach), for more than a year I couldn’t run by myself (I was/am an AVID runner), I was like a hormonal teenager when it came to expressing my emotions, and the list goes on.  The thing is, during that season when I let myself be named and defined as “broken” I WAS, and could easily have stayed that way … YET, progressively receiving the forgiveness of God, the free gift of being included/connected and being named whole, beautiful, and beloved was the single most important thing in setting me free from that slavery and leading me into a better and more loving life than I could have imagined. 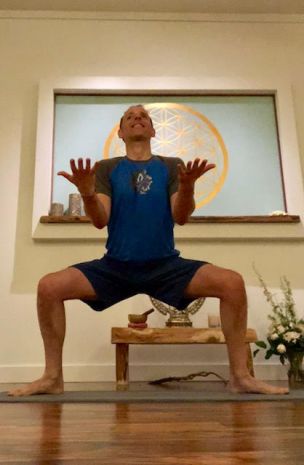 (I think this pic of me in Temple Pose with my palms up in a gesture of receptivity really gets to the heart of what I’m saying.  Worth, belonging, love, wholeness, and beauty are all FREE gifts from God because that’s what our Creator says, sees, and thinks about us.  That’s how God made us.  It’s not anything we do, it’s an everlasting and unchanging gift to be received from our heavenly Parent.)

Another journey of receiving and sharing Christ’s forgiveness happened for me when Carla and my marriage later fell apart.  Her divorcing me led me down two dark paths I needed mercy to be freed from.  One of the loudest voices in my head from being divorced was that I was unlovable and a failure when it came to the most important relationships.  A less prevalent, but equally damaging one was the one that blamed and demonized her.  In that season, in one of the few times I believe I’ve heard God verbally speak to me, a sweet voice kindly told me: “She’s doing the best she can.  Just … like … YOU.”  In short, in the midst of my shame and despair Jesus sweetly reminded me my failures NEVER defined me, only God’s free and lavish Love does, while during my blame and hurt the Christ gently let me know the same was true about Carla.  Forgiveness is the sweetest of gifts.

I’ll end with a story about Jesus that I think really drives this home.  For three plus years before he was crucified by Rome on a cross, the Christ spent virtually every waking moment with the twelve disciples.  As you can imagine, they were tight, they became the closest of friends.  I point that out because when Jesus got arrested, put on trial, and crucified EVERY disciple ABANDONED him, but one.  In fact, one of them, Judas Iscariot, is the one who betrayed him to his opponents, while another, Peter, denied him.

THEN, as Jesus hung dying an EXCRUCIATING death on the cross, with his Roman killers and Jewish opponents looking on in satisfaction, the Christ pronounced universal forgiveness for them ALL … after which it gets even better.  After Jesus rose from the dead on Easter, he appears several times to his peeps, you know the ones who ABANDONED him … YET he never mentions it.  Christ simply includes them, cares for them, and loves them AS they are.  In fact, we see in John 20 (among other places) the first thing Jesus says to the disciples is “shalom” (in English it’s translated “peace”, and that’s okay but it doesn’t get at the fullness of the word).  Shalommeans wholeness, fullness, peace, health, favor, and bliss; in short, it’s everything as it should be (like the “Lego Movie” song “Everything is Awesome!”), which means Jesus’ FIRST words to the people who likely hurt him the most by abandoning him in his time of need are a radical, divine forgiveness that says: You are whole, beautiful, included, and beloved AS you are NO doing required.  After which, in John 20, Jesus tells them to go and share/spread this AMAZING message to others.

It seems to me Christ’s divine forgiveness is a gift of EPIC proportions that has the power to change our lives and the world, so may we all receive, feel, and spread these words and this naming: “You are NOT broken, you are BELOVED.”