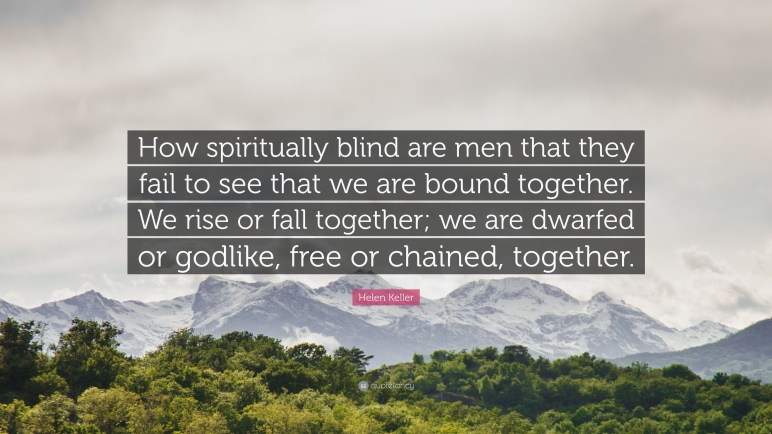 There is no path topeace; peace isthe path.  It seems to me one of the biggest problems in the world today is division.  All too often when people think, look, believe, and/or act differently from us, we name them other, which all too easily allows and pushes us to exclude, ridicule, demonize, and even harm or kill them (literally and/or metaphorically). With that in mind, it seems to me “them” is quite possibly the foulest 4-letter word.

I totally get “they” and “them” are helpful and necessary terms for navigating life (ex. Sam and Sue are engaged; they will get married in March).  What I’m getting at is naming, categorizing, and defining a person or people group as such, which I think will make sense as we progress.

In the Sermon on the Mount Jesus gives his most poignant teaching on what it means to be fully and vibrantly alive. In it the Christ tells us not to hate our enemies, but to love them and pray for them, as by doing so we will bechildren of God.  It seems to me while every person is a child of the Creator, it’s only when we tangibly care for others freely and indiscriminately that we’re acting like kids of the Divine.  As we say in yoga: We’re all connected.  Every person is an equal bearer of the Spirit’s Light.

I’m convinced that by telling us to love our enemies Jesus is opening our eyes to the following Truth: EVERY human is part of God’s family, which means we’re ALL sisters and brothers and nobody is a “them” because everyone is part of us!  More and more these days I’m trying to remind myself “I have no thems”, because the problem with categorizing a person or people group as “them” is it instantly names those people as other than us, which generally means we see them as less valuable, less intelligent, less enlightened, and ultimately less human.  This perspective both allows and leads “us” to exclude shame, cast out, and/or harm “them”.

I grew up Christian and have basically gone to church my whole life.  In the last couple of weeks, though, in podcasts I heard people talk about two Bible stories I’m fairly confident I’ve never heard referenced in church, but wish were preached every Sunday.  The first comes in Joshua 5.13-15.  In this story the Israelites are about to enter the Promised Land (i.e. Israel), the only problem is it’s occupied by other tribes.

Here the Israelites are the good guys, the “us”, while the other tribes are “them” and the bad people … at least that’s how the Israelites viewed things.  As Joshua is preparing to lead Israel to take down Jericho (one of the tribes in their way) the following occurs:

Once when Joshua was by Jericho, he looked up and saw a man standing before him with a drawn sword in his hand. Joshua went to him and said to him, “Are you one of us, or one of our adversaries?” He replied, “Neither; but as commander of the army of the Lord I have now come.”  And Joshua fell on his face to the earth and worshipped, and he said to him, “What do you command your servant, my lord?”  The commander of the army of the Lord said to Joshua, “Remove the sandals from your feet, for the place where you stand is holy.”  And Joshua did so. (Joshua 5.13-15, New Revised Standard Version)

While soon after this Jericho and most all its inhabitants is destroyed, presumably with God’s aid, in light of Jesus and other stories in the Bible, I take this passage to reflect the heart of God. The Divine has no sides.  Our Creator is pro EVERYONE.  God names nobody “them”, but declares all “us”! 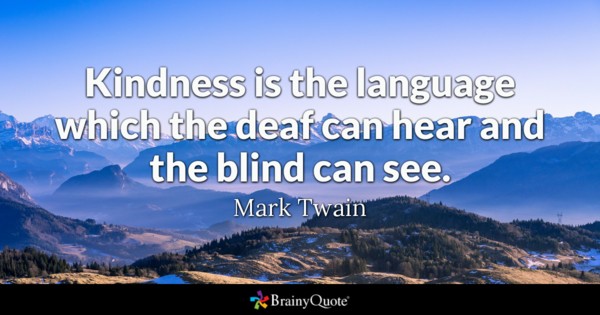 Pretty cool stuff, right?  It gets even better in a story about the prophet Elisha, set hundreds of years after Joshua and Jericho and found in 2 Kings 6.8-23. This specific time finds the king of Aram at war with Israel.  Inspired by God, though, Elisha keeps giving the Israelites intelligence updates on where the Arameans will be so they can be prepared and ready for them.  When the king of Aram finds this out he’s understandably ticked off, and sends his army to seize Elisha.

So it was that Elisha’s servant woke up one morning to discover they were completely surrounded by the “enemy” army and certainly doomed.  Elisha, though, reveals to his scared mate a heavenly host of angels there to protect them. He then prays for the Arameans to be struck blind, and they are, at which point:

Elisha said to them, “This is not the way, and this is not the city; follow me, and I will bring you to the man whom you seek.”  And he led them to Samaria. [I gotta say this reminds me of Obi Wan Jedi mind tricking the storm troopers in Star Wars :)]

As soon as they entered Samaria, Elisha said, “O Lord, open the eyes of these men so they may see.”  The Lord opened their eyes and they saw that they were inside Samaria.  When the king of Israel saw them he said to Elisha, “Father, shall I kill them?  Shall I kill them?”  He answered, “No!  Did you capture with your sword and your bow those whom you want to kill?  Set food and water before them so they may eat and drink; and let them go to their master.”  So he prepared for them a great feast; after they ate and drank, he sent them on their way, and they went to their master.  And the Arameans no longer came raiding into the land of Israel. (2 Kings 6.19-23, New Revised Standard Version)

Israel and Aram were at war, “us” against “them”.  Yet, when Israel, with some divine assistance, had the Arameans at their mercy, instead of saying kill them, the spokesperson for God (Elisha) said to give them a feast!  What better way to name people included, welcome, and part of “us” than via a meal? And just like that the war was over. It seems to me shifting from viewing people from an “us” versus “them” perspective, to one that sees “us” everywhere we look has the potential to change the world in a glorious way.  What do you think?